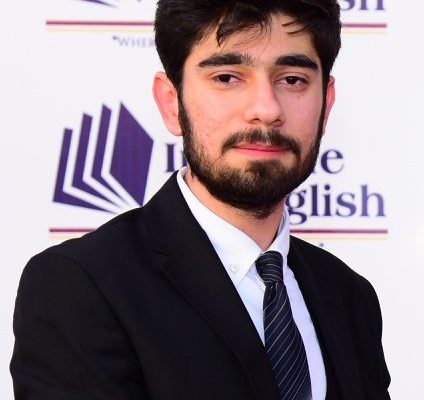 Born and raised in Erbil, Nursi discovered his passion for English at the age of 9 when his parents wrote the English alphabet on a piece of paper for him to internalize, preparing him with the necessary tool for grade 5 in primary school where he would academically study the language for the first time. Over the years of middle school, Nursi became more interested in English thanks to Sherzad Anwar, the only person and uncle around him to speak the language to a useful level. Moreover, he bought his first English-Kurdish dictionary named Zanko to help him expand his English vocabulary as technology was available at its most basic form at that time and was only accessible to the more fortunate. In the last two years of preparatory school, he took English classes taught by Fuad Fakhri, an influential and charismatic teacher and mentor whom he deeply admired. By the time he finished school, Nursi had watched and played numerous movies and video games which equipped him with satisfying command of the language. Having set his mind on his journey further into the language, Nursi attended the English department at Cihan University to hone and refine his English language skills. University played a vital role in him being an adept user of the language, especially the linguistic subjects such as syntax and pragmatics. Nursi started teaching English in early 2019 shortly after graduating, and he has taught various levels and age groups at Collins Institute since he began his career. His passion for this universal language is profound and he is determined to continue to deliver exceptional teachings.